We recently returned from a three week break in the USA and Canada, spending time in New York, Boston, Toronto (with a couple of nights in New Hampshire). We'd broken the trip up, beginning and finishing in NY, and  hitting New Hamsphire, Boston, and Toronto in the middle. the first New York section is the subject of this post.

How much has airline travel and inflight entertainment changed. Gone are the days of one screen displaying movies on a cycle, now you can chose watch you watch, and can select from new releases; Oscar winners, old favourites and 'world-movies'. The stand out two on the flight over were Hugo and the new Australian film "Any Questions for Ben?".

It really does hit you how far away Australia is; 14 hours to LA, then another 4 to NY. Can't fault the Qantas ground-staff in LA, they really made the process of making the connecting flight seamless. Sure it took two hours to get through immigration, deal with the luggage and get to the gate, but we would have had to tried pretty hard to miss the plane.

One thing I'd love Qantas to do, is give you the opportunity to listen to the pliots speak with the Control Towers (and other planes). Fascinating.  I enjoyed "SkyCam" on the flight home, but that's getting ahead of myself.

Overall impression..
I have now been to New York three times, and each time I have enjoyed the visit more. The first impression you get is the size of the city, and it hits all your senses, the distinctive smells, noise of the traffic, and scale of the buildings. It is true that they are filming something in New York every day, and streets will be closed. While not doing any specific tour, we ate the Soba Nippon, which is apparently one of the characters in SITC had their first date.

The MET
The highlight of the first section was going to the Metropolitan Museum of Art. The scale of the Museum is stunning. You will see art & displays of art from almost every continent & period of history. Even if you spend a week there, I doubt you would see everything. We saw Arms & Armour from medieval Europe, Feudal Japan & the Islamic World, visited some American Houses, glimpsed more varieties of musical instruments than you can imagine. (I almost wanted to take the Pipe organ home for Barneys). 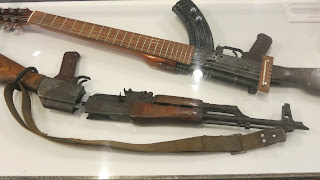 I also went to the UN the last time I was there. We were both struck, by the disconnect between the ideals of the UN, the Declaration of Human Rights and the Millennium Development Goals and how you see them in the real world.  The UN displays gifts the member countries give them. The exhibit pictured, was from Colombia, where confiscated firearms have been modified into guitars. 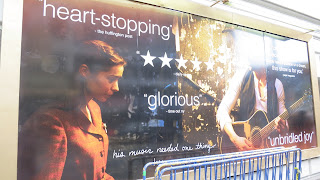 I am a huge fan of Glen Hansard, so the opportunity to see the musical version was too good to pass up.  The musical was held in the Jacobs Theatre. One of the highlights was the bar was on the stage (the bar is part of the set, but was operational too.. so yes, you did go up on stage to get your drinks).

What was really cool about the show was while people were getting their drinks, the cast came out on stage and started playing songs. All of the cast not only sang, but played an instrument.  It really captured the feel of busking. The musical captured the film quite well. If you have seen the film you'll know most of the songs. The cast do an a-capella version of  'Gold' which is beaut.  Cristin Milioti & Steve Kazee where great as the guy & the girl.  Once deserves to do well in the Tony Awards (held Sunday in the US). I do hope that Australia gets to see Once


Greenwich
Another of the highlights was doing one of the Food Tours (by Foods of NY), where we got the eat some of the real great NY food - original NY Pizza, a variety of cheeses, some beaut Arancini. We also got to taste some awesome Olive Oil. The tour guide also talked a little bit of the history of New York and the area which was great. Adding to the feeling that you were walking through a movie set, we saw the apartment building used for the external shots in FRIENDS.

That, I think, sums up the first few days in NY.
Posted by Unknown at 8:19 am
Email ThisBlogThis!Share to TwitterShare to FacebookShare to Pinterest
Labels: Travel, Travelogue