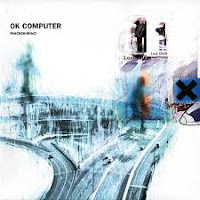 It's hard to believe it but Radiohead's OK Computer just turned twenty. It was released on May 21 1997.  The first I heard of Radiohead was their 1993 song 'Creep' which I don't recall thinking much of at the time. I completely missed their second album 'The Bends', though looking back I recall 'Fake Plastic Trees' which was on the soundtrack to Clueless.

OK Computer came out at just the right time for me, I was at Uni and my classmates were introducing me to a range of artists I hadn't heard before and I was looking exploring new music.

I loved the album on my first listen, I remember it being an album that was best listened to with headphones as there was so much going on with both Thom's voice and the band playing behind. I loved Thom's voice which was so unique, and I loved how it changes within and between songs.

The highlights for me back in 97 were Paranoid Android, Exit Music (for a film) and Let Down. Radiohead still have a knack for putting out albums with bleak lyrics, and probably are one of the few bands I listen too were the sound gets me more than the lyrics.

It is an album that hasn't aged, each of those tunes sounding as fresh now as in 97. It was their 1998 live show which really cemented to me how great the band is.  I just remember being stilled by the music, the performance was almost note perfect.

Worth reading this Rolling Stone piece about the album ahead of Friday's release of the anniversary issue.
Posted by Unknown at 8:36 am
Email ThisBlogThis!Share to TwitterShare to FacebookShare to Pinterest
Labels: Music