This Pilgrim Way - A Horse & His Boy 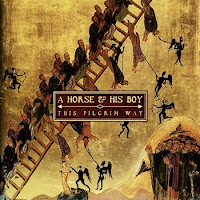 I had been looking forward to this album since I heard the EP Trilogy. A Horse & His Boy sprang from the mind of Seth Harper (with some help from a few scrappy Narnians).

The album is conceived as "an adventure story in miniature" reflecting on the journey we take as Christ's followers. Here's a few reflections on some of the songs.

And the world was an ocean: Our life is described as akin to that of a man adrift on the ocean, waiting to be 'rescued or die'. Its such an evocative image. Highlighting that we 'are lost without you'

When I run: The song mind the story of Eric Liddell - I think - who said that when he ran he felt God's presence and pleasure. A reminder for the listener that all of their gifts and talents are His, and we are happiest when we are them for God's glory.

Glory, Hallelujah: My favourite song on the album. I just love the metaphor the song uses, their faith describe as a song. The song takes you through the journey of the people of God, from slavery and deliverance from Egypt, to God's present leaving the temple, the birth of Jesus, and the eventual triumph where the whole earth and every stone will sing the song of the creator.

{untitled} : It's easy to relate to the plea of this song, a plea for God to come, bring an end to injustice, and judge the wicked, but with that a plea He would show mercy and save many.

The Everlasting Arms: The concluding song, is an old hymn written by Anthony Showalter & Elisha Hoffman, (published 1887), and it reminders the listener where we end our journey, in the safe and secure arms of God.

In summary, the albums richness is in its lyrics which highlight the journey we all take as followers of Christ. I recently discovered you can buy the demos which are versions of each track with Seth's voice and an acoustic guitar, which just highlights the power of the words. I definitely recommend the album.
Posted by Unknown at 7:14 pm
Email ThisBlogThis!Share to TwitterShare to FacebookShare to Pinterest
Labels: CD Review, Christian Music